What happened when a city full of teachers, most of them black, was fired

Research shows that half of the 4,300 New Orleans teachers fired after Hurricane Katrina never taught in Louisiana again 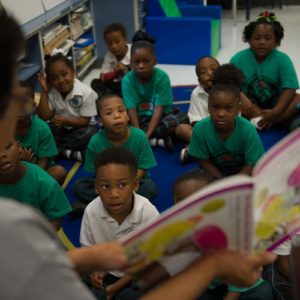 In the wake of Hurricane Katrina, thousands of New Orleans teachers were summarily dismissed after the Louisiana Legislature voted to turn over all but a handful of the city’s schools to the state-run Recovery School District. The Recovery District eventually converted all of those schools into public charter schools. This decision not only fundamentally altered how the city’s schools are run but also upended a profession that launched thousands black New Orleanians into the middle class. A new study from the Education Research Alliance at Tulane University shows that half of the teachers fired never worked in Louisiana public schools again.

Pre-Katrina New Orleans schools were a bit of an anomaly. In 2003, just 15 percent of teachers in large urban districts across the country were black but in New Orleans, teaching was largely a job done by black women: 71 percent of teachers were black and 78 percent were women. The demographics of the city’s teacher workforce have changed drastically since: in 2014, black teachers comprised a little less than half of the city’s teacher corps.

In the years following Katrina, New Orleans became a mecca for new teachers. Before Katrina, the city’s teachers had an average of 15 years of classroom experience. Now the majority of teachers have less than five years of experience. Jane Arnold Lincove, a professor at the University of Maryland, Baltimore County and the study’s lead author, says that the study suggests that the prospects for those veteran teachers fired after Katrina only got worse over the years, as more schools went charter and those schools embraced younger teachers recruited through programs like Teach for America.

Only half of New Orleans’ 4,300 teachers were rehired in the years after Hurricane Katrina

The study highlights two years of employment records to show how pre-Katrina teachers fared as the reforms took hold. In 2007, the second full school year after Katrina, those teachers made up a large share of the city’s educators, but they subsequently started to leave the city’s schools in large numbers.

“Some of that could be teachers retiring, but it could also be that even if they got hired they might not have been the kinds of teachers the charters wanted,” said Lincove. “Veteran teachers get paid more, they might have been cut to help schools meet their budgets. We don’t know if a teacher left a school voluntarily or because they were forced out, but what we do know is that when exiting teachers were replaced they were replaced with teachers who were paid less, had less experience, and were more likely to be white and from out of state.”

In the fall of 2007, about a third of the 4,300 teachers fired after Katrina were working in New Orleans public schools again. Another 18 percent were working elsewhere in the state. But by the fall of 2013, just 22 percent of those educators were still working in New Orleans. That’s a much larger drop than seen elsewhere in the state where 15 percent of the Katrina cohort was still employed by schools in other parishes. Some of the turnover can be explained by natural attrition. Nearly a third of the teachers fired in 2006 were already eligible for full retirement benefits. But when comparing pre-Katrina New Orleans teachers to similar educators in other parishes devastated by 2005 hurricanes, the researchers estimate that the attrition rate was at least 16 percentage points higher for the city’s teachers.

While the black community was hit harder by the firings because so many teachers were African American, the researchers did not find a racial disparity in who was rehired after the storm. In fact they found that black teachers were slightly more likely to return to New Orleans schools than their white peers. But the researchers found that white teachers fired after Katrina were more likely to be hired by charter schools than black teachers were. Returning black teachers were more likely to be hired by the few schools still run by the Orleans Parish School Board. Lincove says it’s unclear if this trend emerged due to hiring practices at charter schools or because teaching in the city just became less attractive to black teachers. One important difference Lincove points out between OPSB schools and charters is that the district still offers teachers a pension.

“A lot of people have been talking about the effects of these reforms on the black middle class,” said Lincove. “While we saw more rehiring than we expected, I think we need to look at the long term of effects of falling out of the pension system. Teachers now have to accept a job without a pension, so we are going to see a different type of teacher.”

Lincove added that charter leaders worried about teachers not viewing it as a long term career should “think systematically about what kinds of long term retirement benefits and long-term job security might need to be offered to avoid this.”

Brian Beabout, a professor at the University of New Orleans, says that it’s going to take more than changing benefits to make New Orleans a town for career teachers again.

“I think we want to fight this fight on two fronts,” said Beabout. “We want to make career teaching is a viable pathway. That’s good for our students, particularly for getting some consistency for students that have gone through a lot of trauma. But the pressure of accountability makes teaching a very different practice than it was, before.”

The use of standardized tests to evaluate schools and individual teachers has been harder for veterans to adapt to, Beabout argues. “ There’s a lot of pressure on teachers that wasn’t there before,” he said. “Charter leaders have to recognize they are not going to get 25 years from everyone, so the question is how do we get from four years to staying eight or 10 years.”

There is currently a concerted effort by several charter leaders to recruit teachers with local roots, particularly black educators, in large part because those teachers are more likely to stick around for the long haul. This local initiative is part of a larger national push that is responding to bevy of research showing that black kids benefit from having black teachers. Black students tend to be disciplined less, graduate at higher rates and get referred to advanced classes more when they have black teachers.

There are several limitations to the study. Researchers utilized Louisiana Department of Education employment records, so the study can only speak to whether or not fired teachers ever worked in a Louisiana public school again. Some of these teachers could now be working in private schools or in other states. The data also only runs through 2013, largely before the local hiring push, so it remains unclear of teachers fired after Katrina have benefited from that nascant emphasis.